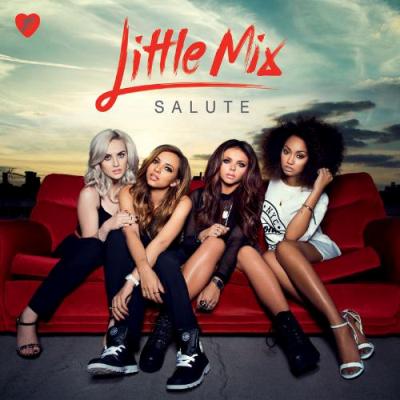 Little Mix To Release New Album SALUTE In The US On February 4th, 2014

NEW YORK, Nov. 5, 2013 /PRNewswire/ — Earlier this year Little Mix entered the Billboard 200 album chart at No. 4 with their debut album DNA, making history as the first ever British girl group to debut in the top 5 with their first album.

Since then, Little Mix have amassed a massive and loyal fan base around the world and are readying the release of their second studio album SALUTE. The album’s first single is the fresh sounding, mature dance anthem “Move,” available digitally now. SALUTE will be released via SYCO/Columbia Records in the US on February 4th, 2014 and is available for pre-order here: Smarturl.it/LittleMixSalute. Fans who pre-order SALUTE on iTunes will receive new tracks early in a countdown to the album’s release, beginning today with “Move.” Visit www.little-mix.com for track and release date information as they are announced.

Having co-written eight of the twelve songs on their debut album DNA, Little Mix have been even more involved with SALUTE, creating a collection of forward-looking pop songs that takes the blueprint of their debut and adds a cooler, more mature and ultimately more experimental sound. Stand-out tracks on the album include the infectious title track “Salute,” the gorgeous fan empowering “Little Me,” and the poignant “These Four Walls.”

Bold, confident, emotionally-resonate and bursting with character, SALUTE is a quantum leap forward from what Little Mix have done in the past. “We want to make sure that every country we go to we get the chance to show them what British music is all about,” said Jade, a sentiment the entire band echo. “Look out world, Little Mix are coming for you again!”

The Carly Cussen (Olly Murs, Ed Sheeran) directed music video for “Move” debuted last week and has since amassed over 4.5 million views. BILLBOARD calls “Move” a “fantastic new single” while noting the video “harkens back to the glorious days of early-00s bubblegum pop and mixes an appreciation for throwback choreography with slow-motion sultriness.” Check out the video here: smarturl.it/LMMoveVideo.

In support of SALUTE, Little Mix will embark on their first ever US arena tour as the lead openers on Demi Lovato’s THE NEON LIGHTS TOUR. The 27 city tour kicks off on February 9, 2014, in Vancouver, British Columbia at Pepsi Live At Rogers Arena. Additional dates include stops in the New York City area, Chicago, Toronto, Dallas, Houston and Atlanta. THE NEON LIGHTS TOUR will also feature Fifth Harmony on all dates throughout the tour and Cher Lloyd on the final 7 dates. For tickets please visit www.livenation.com.

In just under a year, Little Mix have sold over 3 million records worldwide and have captivated the US with their GOLD certified debut single “Wings,” which has been featured in the hit shows GLEE, American Idol and Dancing With the Stars. Little Mix made their US television performance debut on ABC’s GOOD MORNING AMERICA SUMMER CONCERT SERIES in June 2013, and have since performed on ABC’s Live! With Kelly and Michael in addition to presenting the Candies Fashion Award at the 2013 Teen Choice Awards. Little Mix have graced the covers of Seventeen and Girls Life magazines, and have also been featured in Teen Vogue and Paper. The girls have since amassed over 150 million cumulative VEVO views, 3.3 million Facebook fans and over 4.4 million Twitter followers.

The Palace At Auburn Hills