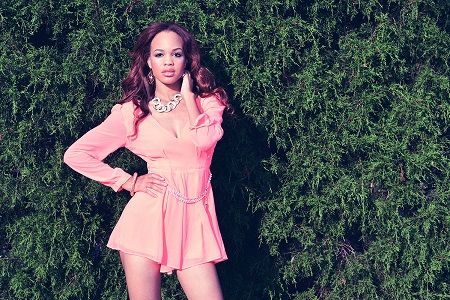 Columbus, GA-based Urban/Pop artist Taelor Moore is excited and ready to share her talent with the world. Currently in the studio working on her debut album, Moore is scheduled to release her highly anticipated album in June 2015.

“It’s an amazing feeling. I get to come out of my shell and create. One of the best things about being an artist is you get to create and experience the finished product knowing that you had a hand in making it come together,” says Moore.

Moore dropped her debut single, “Favorite Song” last year and received great responses. She will release her second single in the spring.

Moore’s forthcoming album will deliver R&B, Adult Contemporary and Pop. “My fans can expect to get a taste of who I am as a person. They will get a chance to hear some of my inner thoughts that I wouldn’t normally share with the world. They will experience some of my high moments and low moments. I share some insight into my personal relationship experiences. Just overall authentic moments will be shared,” Moore says. Her musical influences include India Arie, Brandy, Monica, Toni Braxton, Musiq Soulchild, Eryka Badu and Lauryn Hill.

She added, “I’m just really excited to be able to open up and share my music with the world and take them on the Taelor Moore experience,” says Moore. Check out Moore’s debut video, visit http://youtu.be/IJNP-hZjuIA. Visit her website @ http://www.taelormoore.com

In addition to her very promising career as an urban/Pop singer, Moore will also continue her career as an emerging model. She has had incredible opportunities to expand her brand in runway, commercial, and print modeling. Moore has done work with international hair companies such as Universal Beauty Products, Basic Hair Care and As I Am. She has also done work on Vh1’s Single Ladies, Fast and Furious 7, and one of HBO’s new pilots coming soon. She has already gained recognition from the United Kingdom for her outstanding images and meaningful message to the world.

Stay tuned — Taelor Moore is just getting started, and she is coming to a city near you.

Two childhood friends, Ira Doughty-COO and Keith Saunders- CEO, created Armoni Records. They initially created the label so they could produce great music and after careful review, they decided they wanted to not only create a company that produce good music, but also cater to clean and thought -provoking music. For additional information, visit www.armonirecords.com.