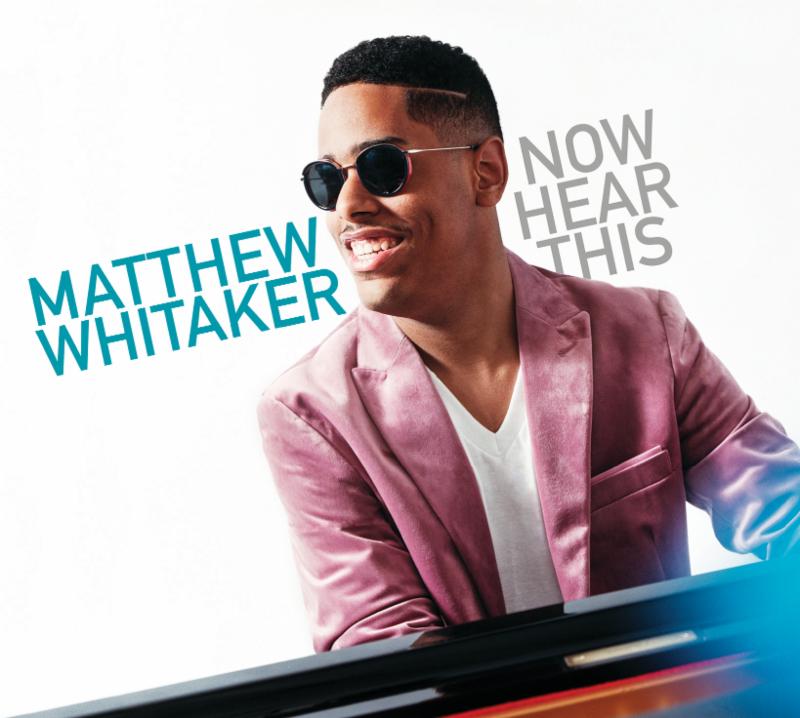 Though he’s still only 18 years old, multi-instrumentalist Matthew Whitaker has come a long way to get where he is today, overcoming adversity and dedicating countless hours to honing his craft. Now, with his declarative label debut Now Hear This, Whitaker announces himself as a major new voice on jazz piano, organ, and a wide range of keyboard instruments.

But it’s Whitaker that commands the spotlight, evidencing a bold and confident sense of swing and a wide-ranging palette that spans straight-ahead jazz and hard bop to R&B and Latin influences. Supplementing his virtuoso piano skills with soulful Hammond organ and coloristic synthesizers, Whitaker leaves any “prodigy” stigma far behind on this stunner of an album.

Whitaker’s distinctive voice would be captivating under any circumstances, but the obstacles that he’s had to overcome in his young life make Now Hear This all the more breathtaking. He was born three months premature in 2001, weighing less than two pounds and able to fit in the palm of his father’s hand. The newborn was given less than a 50% chance of surviving; the oxygen that he was given by doctors allowed him to live but cost him his sight.

Blindness proved no obstacle to playing music, however, and Whitaker displayed preternatural talents from the first moment he touched a keyboard. That initial opportunity came at the age of 3, when Whitaker’s grandfather gifted him a small Yamaha keyboard. “I would come home from school and teach myself nursery rhymes,” Whitaker recalls. “No one showed me how, I just started playing. If I can hear it, I can play it.”

At 5 Whitaker began studying classical piano at the Filomen M. D’Agostino Greenberg Music School in New York City, the only community music school for the blind and visually impaired in the United States. He continues to work closely with the school; his heartfelt composition “Emotions” was written expressly for a performance there. “They’ve supported me since I was 5 and they continue to do that to this day,” Whitaker says.

As a blind African-American piano prodigy, comparisons to Stevie Wonder were inevitable. Meaningfully, Wonder himself gave the younger keyboard wizard his imprimatur when he invited Whitaker to open for him during his induction into the Apollo Theater Hall of Fame. In 2016 Whitaker returned to that legendary stage, this time performing Wonder’s classic “I Wish” for FOX TV’s revival of Showtime at the Apollo.
But Whitaker never set out to be a Stevie Wonder clone, and while the soul icon is a definite influence Whitaker can rattle off a long list of indelible influences that leans heavily towards jazz giants like McCoy Tyner, Barry Harris, Art Tatum, Oscar Peterson, Chick Corea and Herbie Hancock. His gifts have been recognized by a number of jazz luminaries who have provided crucial mentorship, including Cary, Christian McBride, Dr. Lonnie Smith, Regina Carter, Jon Batiste, Roy Ayers and Jason Moran, among others.
His musical path was set at the age of 7 when his father dialed into a jazz station on the car radio one day. “Ever since then it’s been my favorite genre of music to play and listen to,” Whitaker says with obvious enthusiasm. “Unlike other styles of music where you play what’s on a sheet of paper or play just like a recording, with jazz you have the ability to be free with the music and improvise. You can really do you.”

Now Hear This is a perfect summation of Whitaker’s evolution to date. He’s enjoyed a remarkable career already, receiving the Harlem Stage Emerging Artist Award and the Herb Alpert Young Jazz Composers Award among other honors. His promise has only begun to be fulfilled, as he prepares to enter Juilliard as a freshman this fall as the first blind undergraduate student to join Juilliard’s Jazz Study program.

“This album is the next level for me,” Whitaker concludes. “I’m really happy and excited and hope people enjoy it.”